Georg Harrer was born and raised in Vienna/Austria. After graduation, he 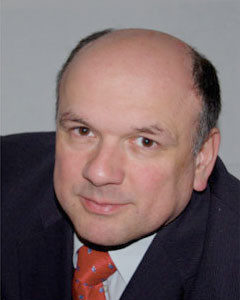 obtained a certification and subsequently registered his own business as a massage therapist. He then attended university and graduated with an M.D. from the University of Vienna. He completed practical training to become a general practitioner at the Medical University of Vienna and at Halifax General Hospital in Yorkshire/UK.

Returning to Vienna Medical University, he specialized in anesthesiology and intensive care medicine and, at the same time, successfully completed his training in osteopathy with the Vienna School of Osteopathy (WSO). Here in 1997, Georg Harrer first came into contact with FDM and Stephen Typaldos, D.O. In 1998, he spent a considerable amount of time in Bangor, Maine/US on an on-site visit with Typaldos which led to a long, close collaboration between the two physicians.

In 2001, Georg Harrer started teaching FDM seminars across Europe. He was, until 2007, the only instructor authorized to teach FDM by Typaldos. After Typaldos’ death, invitations to teach in the US followed and Georg Harrer contributed to several books on the subject of the Fascial Distortion Model.

Georg Harrer, M.D. runs his own practice specialized in the Fascial Distortion Model in Vienna, Austria. He is one of the founding members of the European FDM Association (EFDMA), was elected its president in 2006 and held this function until 2010.

In August of 2011, Harrer was the chief organizer of the 5th FDM World Congress in Vienna.