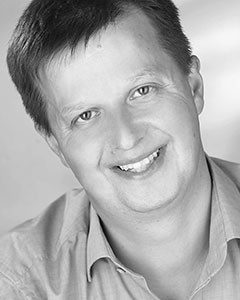 Hamburg University of Music and Theatre before becoming a physiotherapist, a field he then lectured in for 10 years.

In 2003, he started studying for a degree in osteopathy at the University of Wales and the OSD, the Osteopathie-Schule Deutschland (German School of Osteopathy), gaining a BSc and his certification to practice in 2009. During this time he also received permission to professional practice of alternative medicine.

In 2005, he first heard about the Fascial Distortion Model at a congress he was attending. During his osteopathy training, he learned the practical applications of FDM and became proficient due to frequent on-site visits with Georg Harrer and Markus Breinessl in Vienna. In 2008, he became a registered member of the EFDMA. A certification to practice FDM followed in 2009. From 2009 to 2011 he has regularly assisted in FDM seminars. Further expertise was gained at international seminars in Japan and the USA. Since 2011 he is active in the EFDMA board, 2013 – 2017 EFDMA Vice-president.

Since 2011 he helds FDM seminars in Germany, Poland and Hungary. With the FDM Institute, founded by him, he also invites regularly International lecturers to Germany for a seminar.

In addition, Markus Nagel deals in practical and scientific study intensively with the physiology of fascia and the Fascial Distortion Model. He gives frequent lectures on osteopathy at the DIU (Dresden International University) and runs his own practice in Osnabrück/Germany.

Article “Headaches and how to treat them according to the Fascial Distortion Model” from the German Magazine for Osteopathy, volume 10, 2/2012.